Marienbad: The land of the spa

Marienbad is the second largest health spa in the Czech Republic. There are forty springs within the area and one hundred in the immediate area around Marienbad.

Find all Garzotto Hotels in the map, and see the most attractive interest points in the zone.

Marienbad is the second largest health spa in the Czech Republic. There are forty springs within the area and one hundred in the immediate area around Marienbad.

The spa history is not long but for that, all the more interesting. In the place, where in the 18th century it was still dominated by swamps and impenetrable forests, the elegant town, with modern buildings and of large public interest, originated.

In 1866, Marienbad was declared a city and by the beginning of the 20th century ranked among the most important spa centers in Europe.

What to do in Marienbad

From the cultural point of view, Marienbad has a theatre built in 1868, various churches - the local Roman-catholic church of Assumption of the Virgin Mary, the Evangelic Church, the Orthodox Church of St. Vladimír – museums – the Chopin House and the Municipia Museum and the city also offer all over the year cultural events and festivals.

The town offers to its visitors numerous options for sports.

There are tennis court, golf fields, swimming pools, a number of fitness centres and a squash-centre. Other popular sports are walking, cycling and cross-country skiing namely in the area of Slavkovský les, which offers ideal conditions. For lovers of downhill skiing there is a skiing slope with cable-lift. 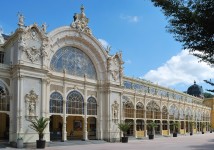 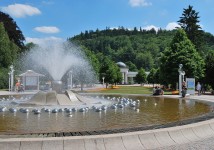